So, what is minimalism, and why have I decided to go minimalist?

Minimalism is usually defined as the process of identifying what is essential in your life and eliminating the rest, so less is more.

So, why minimalist? Well, I’ve always loved how minimalist rooms look, and it seemed like a nice way of leaving stress behind and away from your personal space/stuff. My head has felt a bit scrambled, more than usual recently and in order to de-clutter my head I thought a good way to do that was to physically de-clutter my possessions. You see, I’ve always been a bit of a hoarder.. Never mountains and mountains of stuff so you can’t move around in your own home, but just generally not throwing away silly little things for some reason, which gradually built up over time.

Going minimalist isn’t something that I would suggest doing over night. It can take a fair bit of time. For me it’s taken about two weeks to get my space cleared out, and I think there’s still some more stuff I’ll throw away in the coming weeks. If you’re thinking of going minimalist, I would suggest you set yourself a plan before you begin. Because I’m a person that likes writing lists, I made two. The first one was:

If you’re thinking of going minimalist and wanting some inspiration, here’s a Pinterest Board I made for inspiration:

Once you’ve got your inspiration and set your time-frame, it’s wise to write a list of what you want to sort out and throw away. I set myself a time-frame of two weeks to do the initial clear out; I decided one area per day was feasible for me. If you’re struggling for where to start which clearing out your stuff, here’s my clear out list:

By going minimalist, I’ve been able to stream line getting ready for everything, all because I know and can see exactly what I own. I also feel less stressed, can find anything I need quickly and I now have more space.

I found it easy to fall into the trap of organising instead of purging, so I would recommend having an image that was your inspiration or write down why you’re going minimalist so you don’t just organise and keep unnecessary things. I’ve decided that if I don’t use it and it’s not an important document or sentimental then I need to lose it.

Something I’ve learnt from this is to stop bargain hunting. This one is a big one for me, I love a good bargain, but that’s part of the reason why I needed a good clear out in the first place. So I’ve started avoiding meaningless impulse shopping, which has been pretty good for keeping my room clear and my bank account fuller.

When I decide to buy something, I try and think of how it will be used in my room in six months time. If I think it will be no longer useful then, I have to think if it was really worth my money right now? Is it something that I am willing to swap/replace another item I own.

As I was sorting through everything I made a few different piles of stuff:

Putting everything into different piles allowed me to sort through everything without any guilt. I decided to have a ‘check back in 6 weeks’ pile because some things I was not ready to give or throw away. Becoming minimalist is going to be a bit of an ongoing project of mine, I plan to go through everything every 6 months to make sure I don’t re-clutter and keep everything streamlined.

Just a pre-warning, when you start clearing stuff out, it will look worse before it gets better. So don’t worry if your space looks like a bombs hit it!! Here’s my room before and during the clear out!! 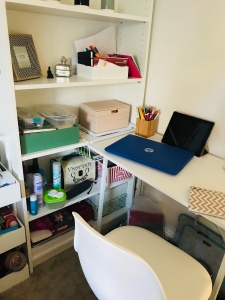 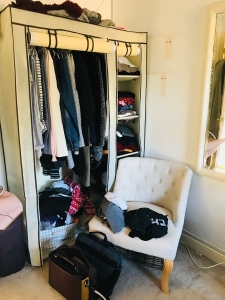 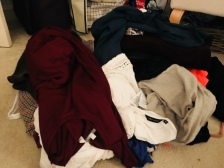 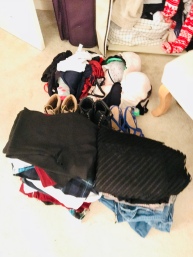 I ended up finding that I had 200 DVDs, about half a wardrobe of clothes & shoes that I didn’t wear or that didn’t fit which were donated to charity and I had roughly 11 bin bags full of just general rubbish that I used to hide away in my wardrobe. I realised that having 200 DVD’s was taking up a large amount of space and just didn’t look great on display and
I had no space for them anywhere else; then I had a flash back to the 90’s where we all carried around CD books with us everywhere. So that’s why I then ordered a big DVD case that holds 208 discs from Amazon, which can be taken anywhere and it’s nice knowing all my films are in the same place.

Here’s some pictures of my space now it’s all cleared out!! 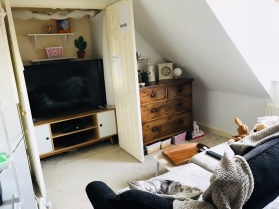 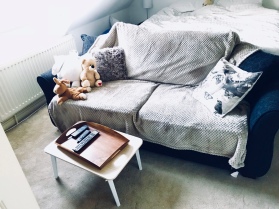 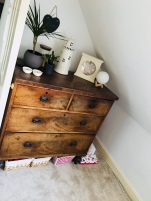 Hope you all have a great week and let me know if you try going minimalist!

This site uses Akismet to reduce spam. Learn how your comment data is processed.