*disclaimer – this could contain trigger warnings*

If you’re wondering why I’m writing this post, it’s because it’s something that I relate to a lot. If you’ve read my about me page or my previous blog post – Anxiety, Body Image Issues and Me you’ll know that I struggle with my body image and food. And this past week I finally went to my doctor to talk about it.. Which I will tell you right now, was terrifying.

So, what happens when you’re developing an eating disorder.. Well it’s not something you decide one day, like deciding you want to go for a bicycle ride. It’s something that happens over time, and often you don’t realise what is happening until it’s already developed.

There are several different types of eating disorders out there, and no two are the same. The most common ones you hear about are:

The first time I realised that something wasn’t quite right was just before Christmas 2017, it was cold outside, I was 7 pounds away from what I had decided was my ‘goal weight’ of 9 stone 7 pounds. I think it was the week before Christmas and one morning out shopping I realised that I was extremely anxious about having Christmas dinner. Anyone that knows me, knows I would happily live off roast dinners, and that Christmas dinner was what I looked forward to the most. So naturally, suddenly worrying about my favourite meal of the year sort of hit home that something was not quite right.

I think part of the reason I was anxious about eating Christmas dinner was because I didn’t have any control over what was in the food. Before I lost a load of weight I wouldn’t give a monkeys about what was in it so long as it tastes nice. Because I didn’t have control over what was going in the food I was worrying about how much fat, oil and what I considered ‘bad’ food I would be eating.

I think I was a little in denial about what was going on at this point, I knew something wasn’t quite right, but I refused to admit that to anyone.. Including myself. So, Christmas finished, I ate hardly any Christmas dinner (and I basically only ate the vegetables and about 2 roast potatoes!!) than I would normally would, and worked out to try and burn the food off.

When I eventually admitted to myself that my relationship with my weight, body image and food was not good, I spoke about it with my family, friends and work family and they all were very understanding and supportive with what was going on with me.

Some of the symptoms of eating disorders I was demonstrating were the following:

It’s a long list I know!! But the thing is, all of these things don’t just happen over night.. They develop over time. Now, although it’s a long list, a lot of these things overlap within each other, and the good thing is that I’ve realised that these behaviours are not healthy. Below is what I would eat in a typical day, and it’s not great, and by realising this, I know taking the first step to getting better is the right thing to do; which is why I am now getting help.

Small bowl of porridge with 1 strawberry and a small banana. 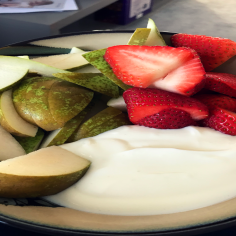 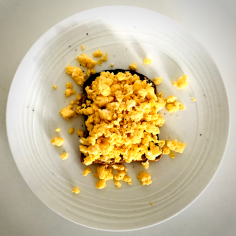 It was not easy asking for help. It was in fact incredibly nerve racking and it felt so weird talking about what was going on in my head. I felt ashamed and strangely guilty of my eating/weighing/body image problems, but after talking to my GP, family and friends, I felt much less ashamed, guilty and alone.

The thing with getting help for eating disorders is that you assume you have to visually look like you’ve got an eating disorder and have a BMI extremely low; but that isn’t always the case. I have now been referred over to a service for young adults with the hopes that I will be able to get some help and potentially see a dietitian in the future if wanted.

If you ever think that you might have an eating disorder you should always go to your GP and ask for help!

You may be wondering what happens when you go to the doctors about potentially having an eating disorder. Well, when I did go to my GP for an appointment I was asked to tell my story of what has been happening to begin with, after that, I let the doctor know what symptoms of eating disorders I was suffering with (I took a list of what I wanted to mention in with me so I didn’t forget, my lovely co-worker suggested that and it definitely helped!), then we checked my oxygen levels, temperature, weight, BMI and I have been booked in for some blood tests to see if I have as a result of my eating habits, become deficient in anything. After going through all of that we decided that it would be a good idea to be referred to a mental health service for young adults (I’m 22).

Once I came out of the appointment I felt so much better knowing that I was going to get the help I needed I would highly recommend it to anyone worrying about any aspect of their mental health.

Anyway, that’s enough jabbering!! I’ll do a follow up post when I am in treatment for my own issues and keep you all updated with what’s happening!

Hope you all have a lovely week ahead everyone!